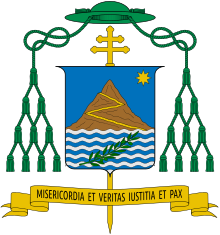 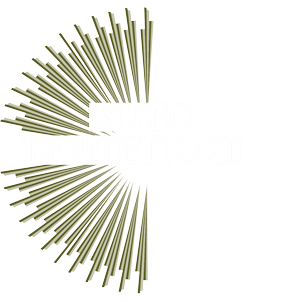 The church below the Cathedral Basilica, which opens onto the square of the main entrance of the same Basilica, is called “Soccorpo”, “Lamia dei Morti” or “Cemeterio” or “Church of the Holy Cross”. The first descriptive evidence of the cemetery environment appears in the second visit of Filippo Cansacchi, bishop of Gravina, in the years 1639-1640. Along the entire central nave and lateral spaces are placed painted or bas-relief tombstones of bishops, prelates and other public figures, accompanied by coats of arms and inscriptions (the oldest bears the date of 1531). The bishops buried in the Soccorpo are 8, all of whom died in Gravina.

The church is similar in size to that of the Cathedral above and is structured in a rectangular room, with three naves, punctuated by massive square pillars and twelve round arches. The naves end with the presence of three distinct altars, of which the central one is dedicated to the Crucifix. Characteristic of the church is the presence of 15 burial grounds. At the time of Cardinal Orsini’s Apostolic Visit (1714) there were 72 which the Cardinal himself reduced to 12: seven in the left aisle for the city of Gravina, one in the central nave for the Clergy and four others in the right aisle for the brothers and sisters of the brotherhood of the Good Death and of the SS. Sacrament. To these 12 was added another one opened in 1772. Three sepulchres closed by the Cardinal himself have recently been identified in the central nave. 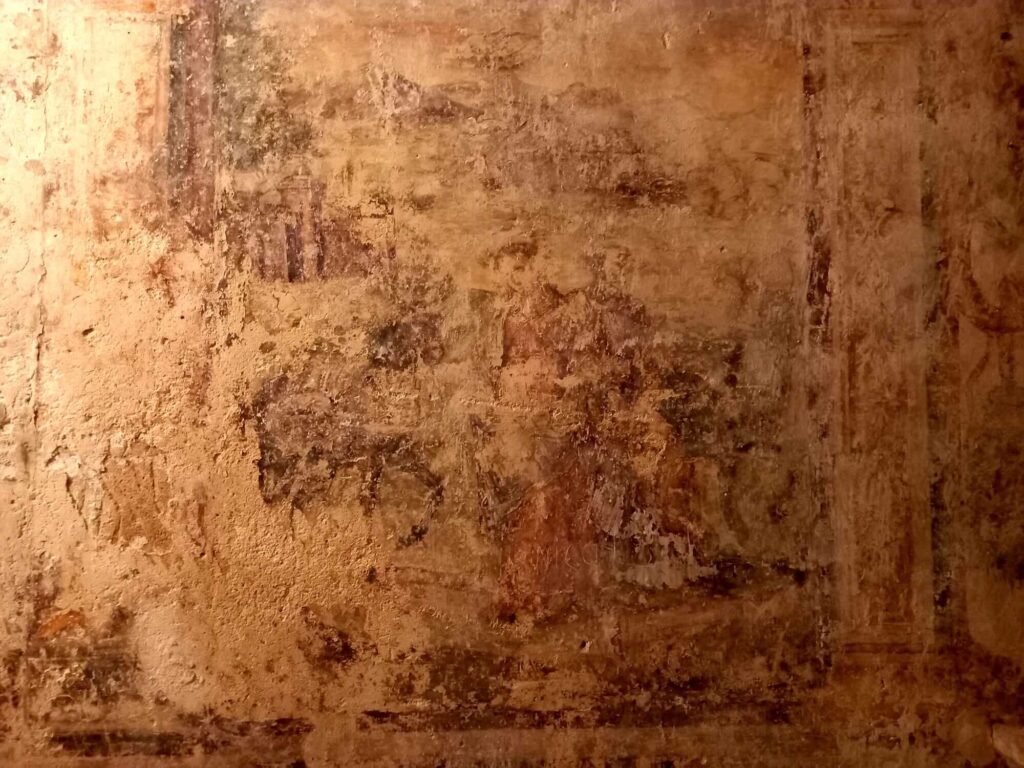 To the right of the entrance, located inside a fornix, you can admire a funerary monument sixteenth century, originally gilded. The monument is set between the two walls originally painted in fresco, as can be deduced from the pictorial fragments of the 16th century. The pictorial motif that embellished the funerary monument was that of the nativity. In fact, at the top of the left wall you can read two inscriptions with phrases from the Latin Bible that help to decipher the scenes represented: the meeting of Mary with Elizabeth and the journey of the Holy Family to Bethlehem for the census (image one).

Under the adjacent vault the flag of the Savoy is painted, accompanied by a date, 1859, painted on the right edge of the representation. 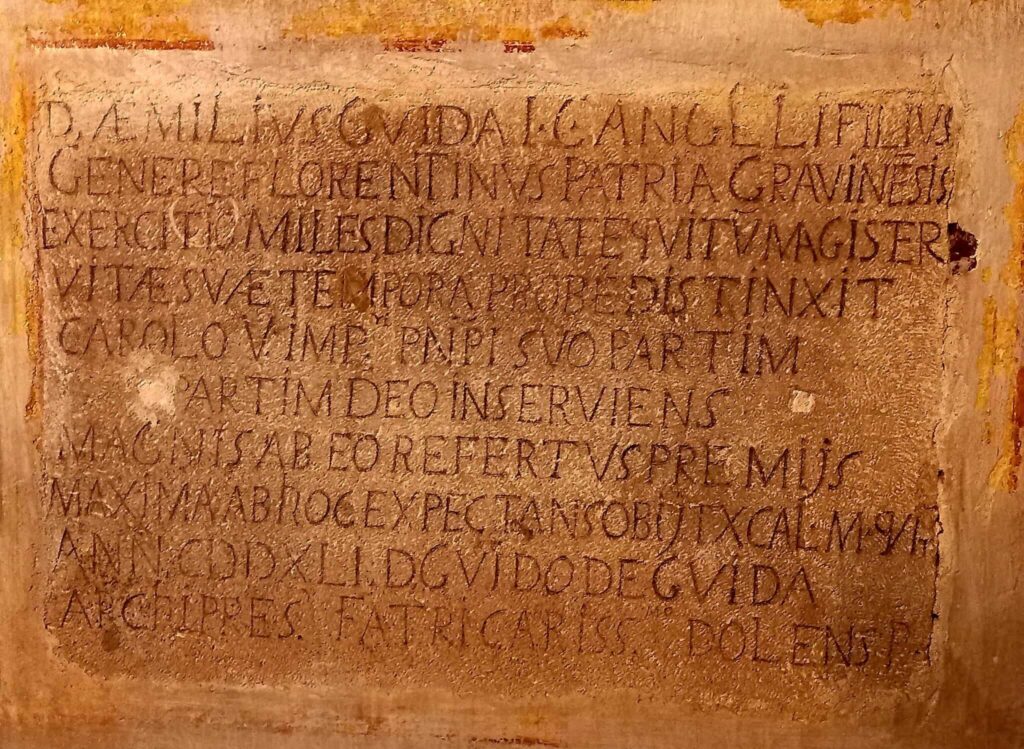 To the right of the entrance to the central hall, on the wall, a stone slab from 1541 makes a fine show, with the epigraph dedicated to Emilio Guida, a cavalry commander under Prince Charles V, belonging to a Florentine family, died on 1 September 1541 (image two).

On the left a funeral monument dedicated to Msgr. Giovanni Angelo Pellegrino, bishop in the years 1552 – 1568. 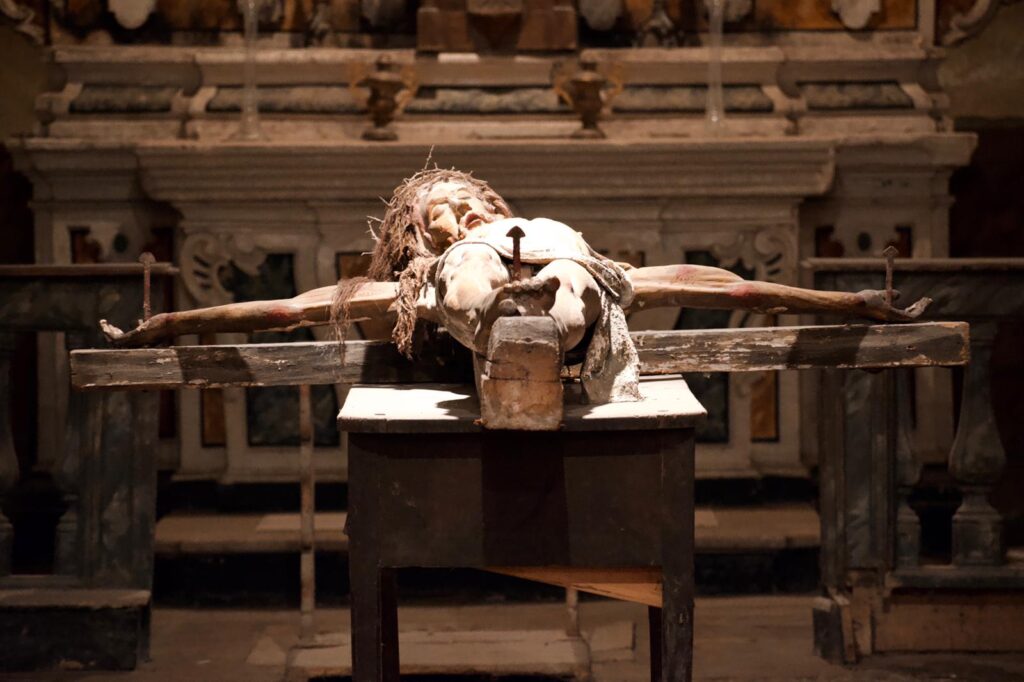 Not far from the wooden balustrade of the central altar, you can admire a precious wooden crucifix dating from the fifteenth and sixteenth centuries. The suggestive sculpture is characterized by a naturalistic and detailed anatomy, suggesting the skilled artistic qualities of the author. The sculpture shows stylistic-formal import notes such as the use of real hair mixed with horsehair to indicate the human and divine nature of Christ who by dying on the cross and rising again deserved us to be able to rise again at the end of history (image three). 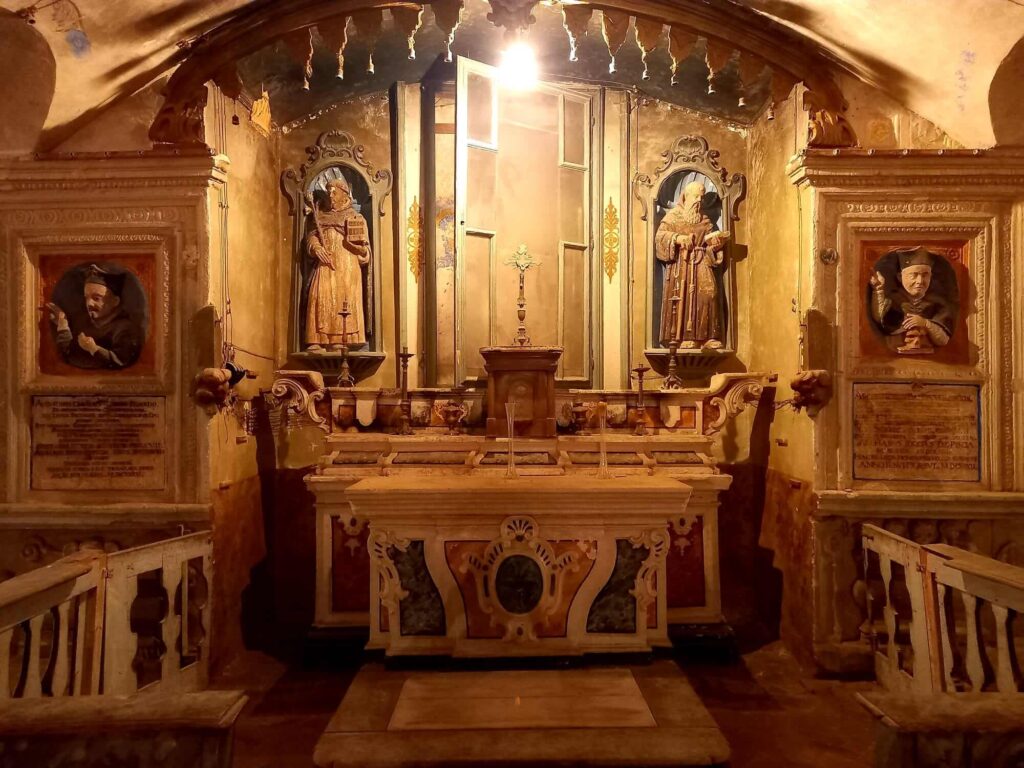 Behind the central altar there is an aedicule with traces of frescoes. On the sides of the central altar are the stone statues of San Domenico and Sant’Antonio Abate. On the two side pillars of the altar, two half-length high-reliefs projecting outwards, overlooking the cenotaphs respectively of Msgr. Agostino Cassandra (bishop in the years 1614 – 1623) and Msgr. Arcangelo Baldini (bishop in the years 1626 – 1629). Next to the celebrant’s throne, an eighteenth-century wooden structure, finely lacquered with flowers and insignia of the Chapter, from the eighteenth century to protect the ancient organ present in the Soccorpo. 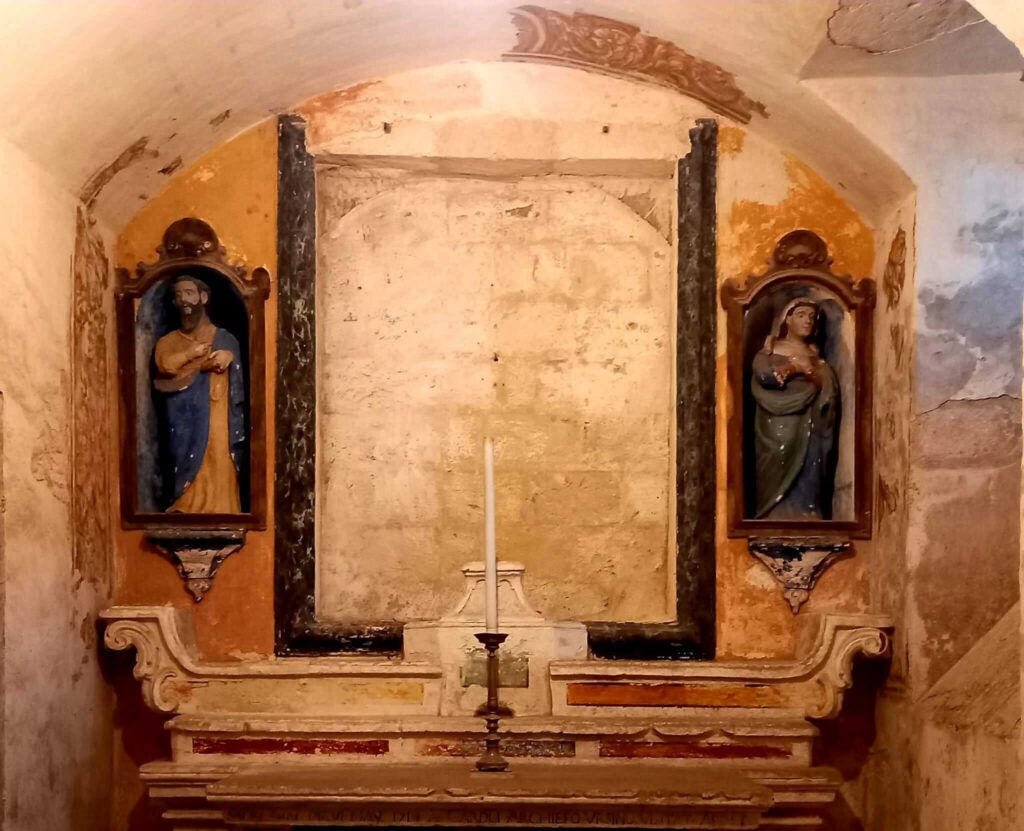 On the altar of the right aisle, consecrated in 1714, there was a painting of the Assumption of Guarinian influence, now located in the sacristy of the Cathedral. The path leads the eye to scrutinize the two side niches of the altar, which house the stone and painted statues of Saint Anne and Saint Joachim. Along the entire floor of the same nave there are seven stone paving stones covering the same number of burial grounds used for the infusion of the deceased faithful of the city of Gravina. 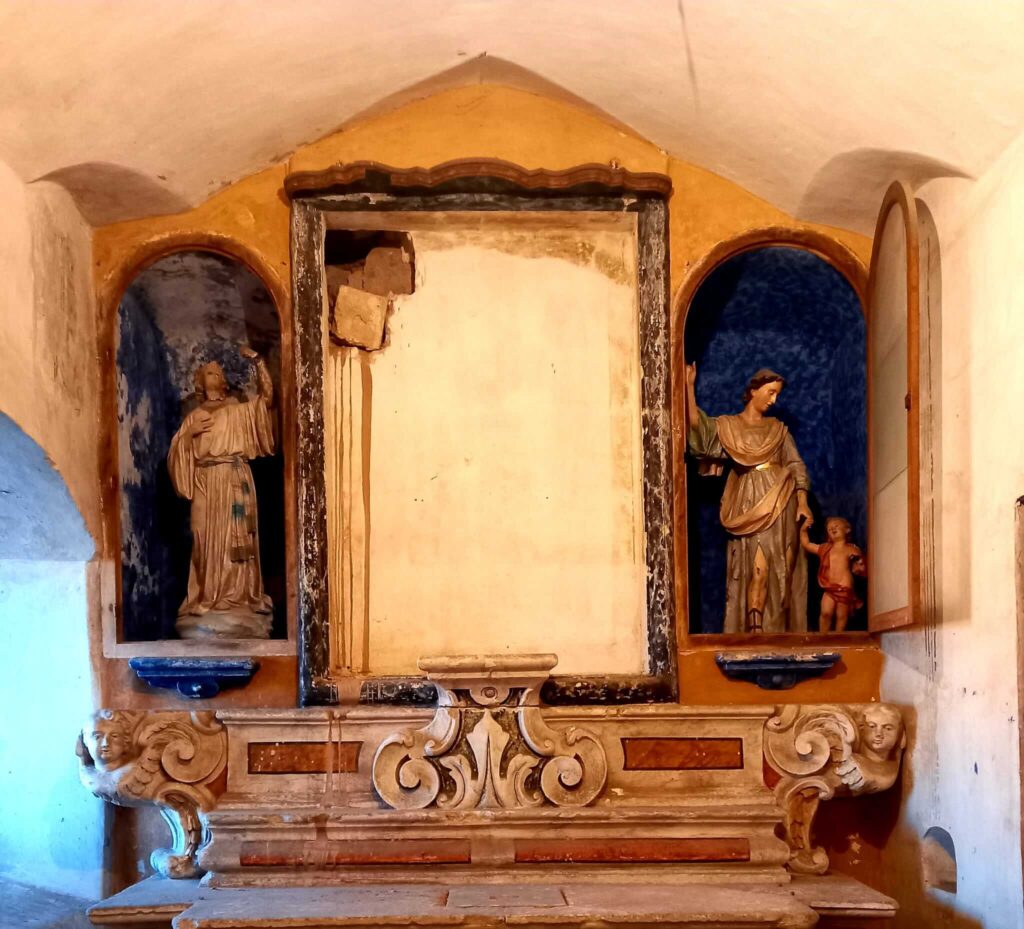 On the altar of the left aisle, consecrated in 1714, there was a painting on canvas of St. Michael the Archangel, which can also be used today in the sacristy of the Cathedral. In the two side niches of the nave there are clay and papier-mâché statues of the archangel Gabriel and the archangel Raphael with little Tobias, denoting the citizenship’s devotion to these figures. Along the same nave there is a plaque near the altar of the notar Colantonio from 1531 and four burials used for the associates of the Confraternity of the Good Death and the Blessed Sacrament. 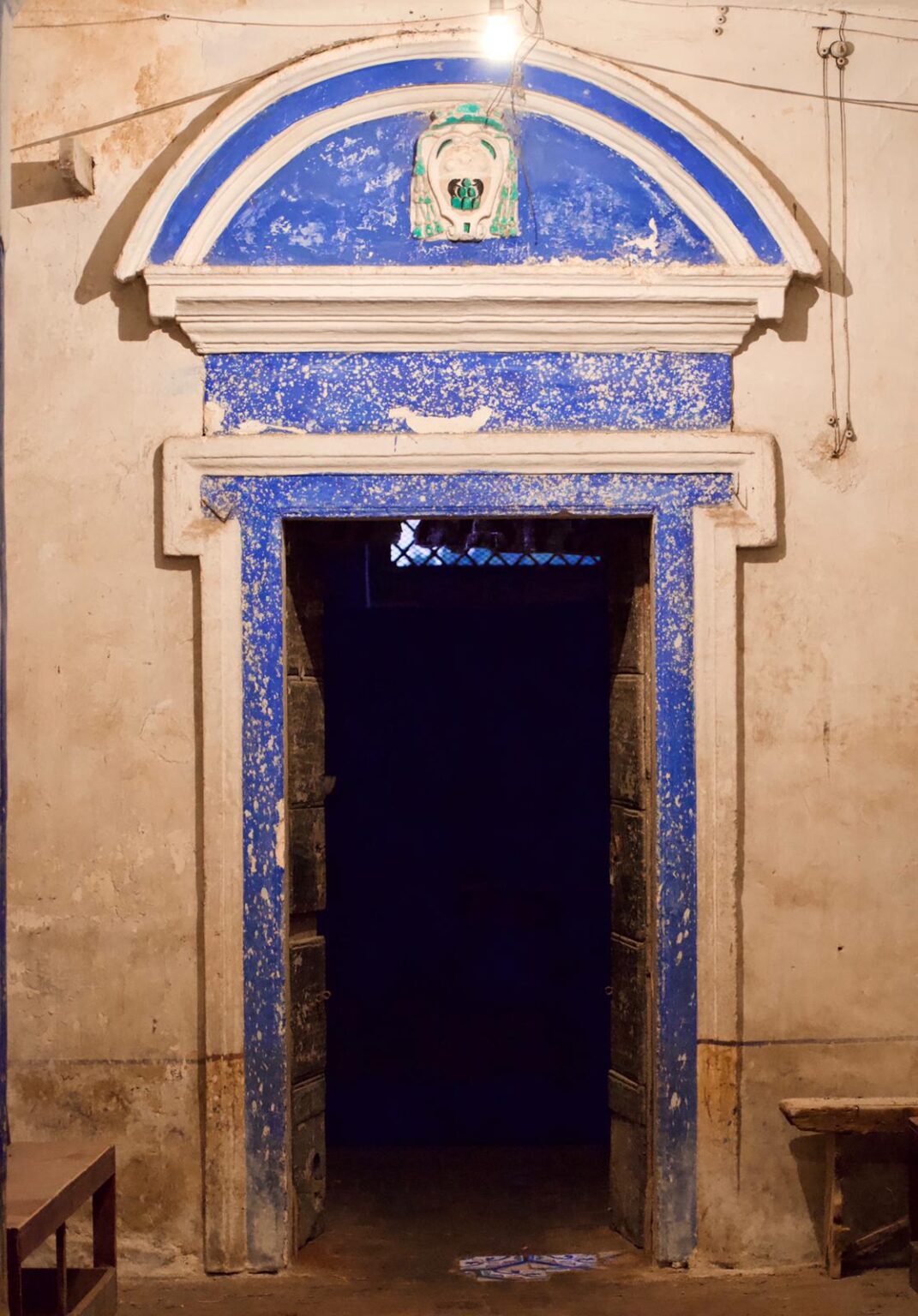 In the middle of the left aisle is the sacristy located in correspondence with the Chapel of the Blessed Sacrament of the Cathedral. Cappellone and Soccorpo are closely linked by the construction history of the building, since it was built starting from the foundations in 1631 by Mons. Ricci. The Soccorpo sacristy has a “counter” for the use of priests, dating back to around the end of the 17th century. Surprising is the presence of a paper inscription relating to the creation of the first fund of the Capitular library by Mons.Cennini between 1684 and 1686, a fruitful seed of what, in 1743, will become a jewel in the Apulian and southern cultural panorama: the Finia Library.